Welcome one and all to the 'Philippine Railway Historical Society' blogsite. This site was set up to share photos, historical pieces, comment and virtually anything else pertaining to transportation in the Philippines, with a special emphasis on rail. Occasional we vary from topic, but this is the less serious side of the hobby shining through - cause sometimes, in this miserable and uptight world, we just take ourselves a little too seriously.

If you have a question Philippine railway related, just drop us a line, maybe we can help.
_
_ 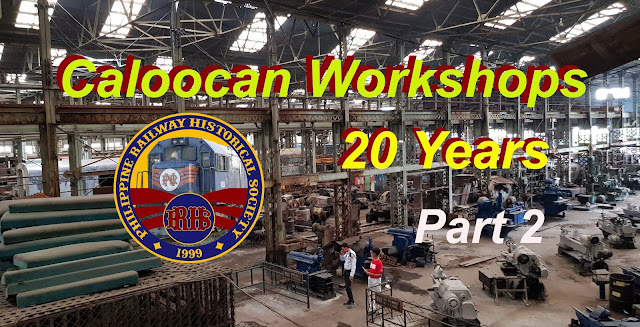 In part 1 of this series, we had a look at the workshops just before Christmas in 2018.
In the second riveting installment, we look at 'Google Earth' aerial images showing the workshops from 2001 until now.
We will then continue our most recent survey visit.
Coming in part 3 will be a final look at the workshops in 2018, before we start working our way back to 1999 (and maybe a little beyond).
Again, a huge thanks to the 'Philippine National Railways' for their immeasurable support over all the years. 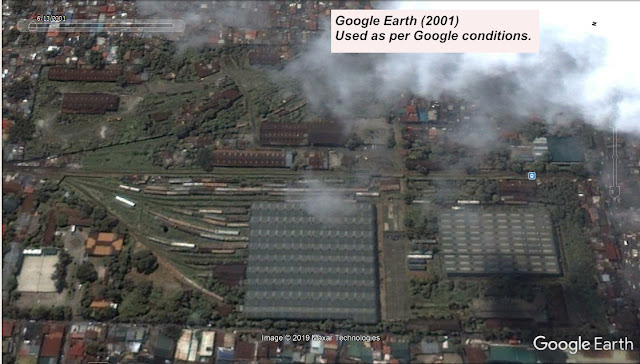 In 2001 all roads north of the main shed were still intact, the railway workshops still extended east of the mainline, the lower level of Caloocan station was still largely intact and there was no sign of the future elevated expressway. 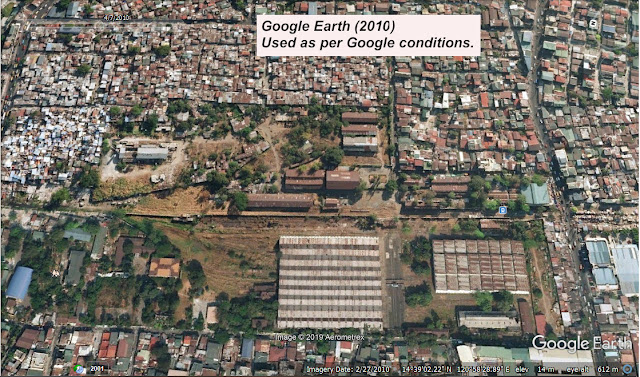 The mass scrapping of 2009 and 2010 had cleared much of the tracks north of the main building, and sadly eradicated a few carriage classes. Some removal of structures had occurred east of the mainline, but most remained intact, including the historic Caloocan station. 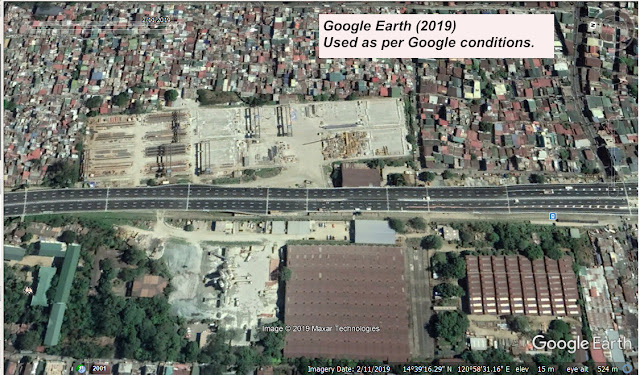 Today it is a vastly different story.
Apart from the historic Higgins Hall, and some walls of the original Caloocan Station, all structures east of the mainline have been removed for use by the company constructing the elevated expressway (also visible).
All the yard north of the main workshop has been removed and in use for construction activity as well. Access to the workshop is now by a single road from the mainline, along the side of the main workshop and onto the traverser (seen between the two main sheds). 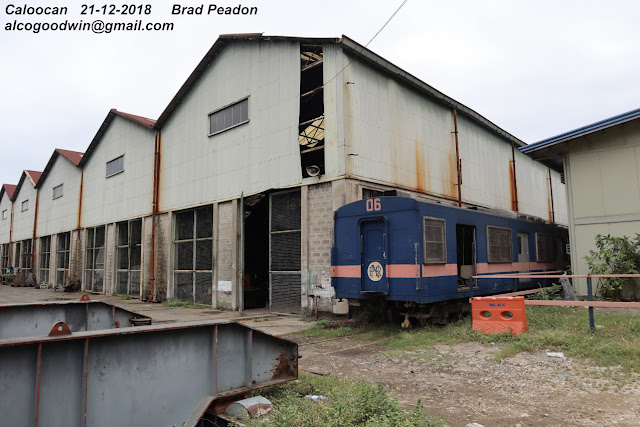 The former Japanese EMU car is seen on the earlier mentioned access road for the workshops. The traverser is seen at far left. 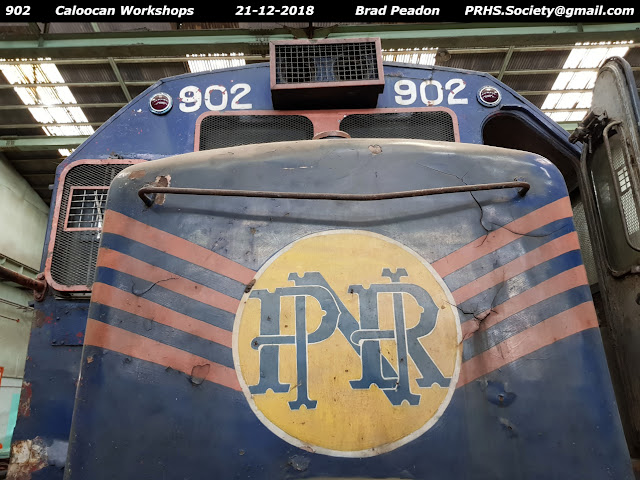 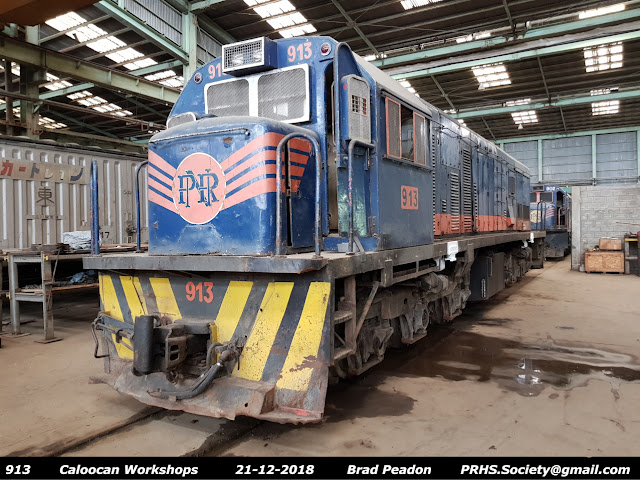 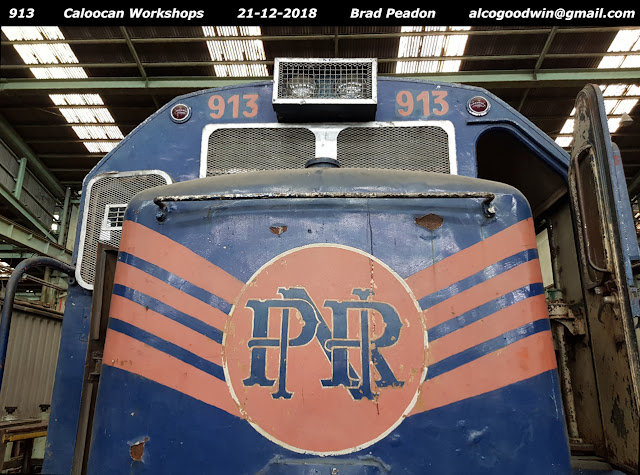 902 and 913 were in the smaller workshop for rebuild.
They would soon be taken down to Desco Engineering (Binan, Laguna) for this work to be completed. We were lucky enough to be invited to inspect this work, but are unable to cover it until after the work is completed. 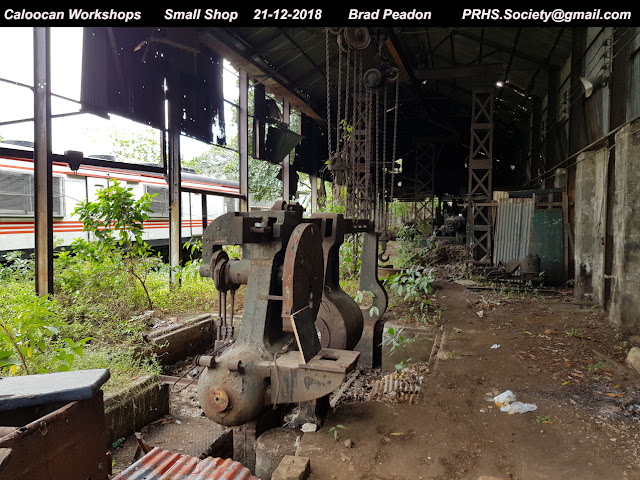 A smaller workshop, the purpose of which is unknown. It does not
look to be currently used. 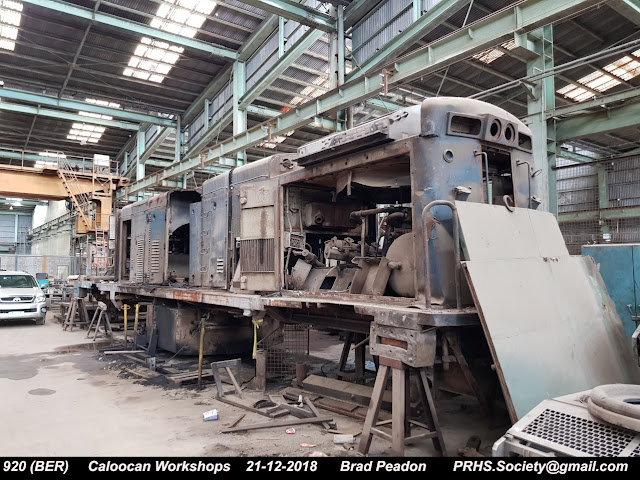 920 has been heavily stripped follow an accident that bent her frame. 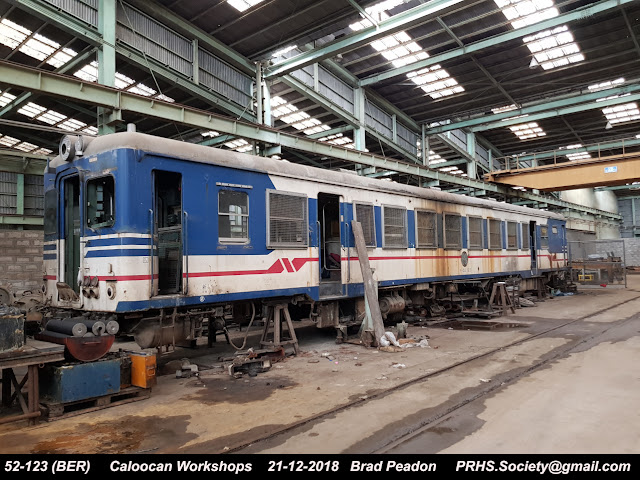 52-123 has also been stripped of parts and is now considered to be 'Beyond Economical Repair (BER). Her, and 920 above, will likely be scrapped when the workshops are demolished, if not beforehand. 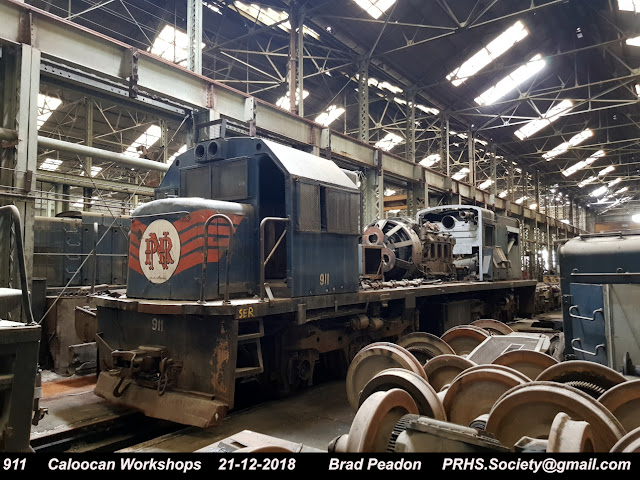 911 still wears her pre-Filtrack dark blue with red livery. However, she has not run for some time and reports indicate that her future is not bright
We are currently in the early stages of publishing a guide to the various 900 class liveries and variations, for modellers and people with a general interest in the class. 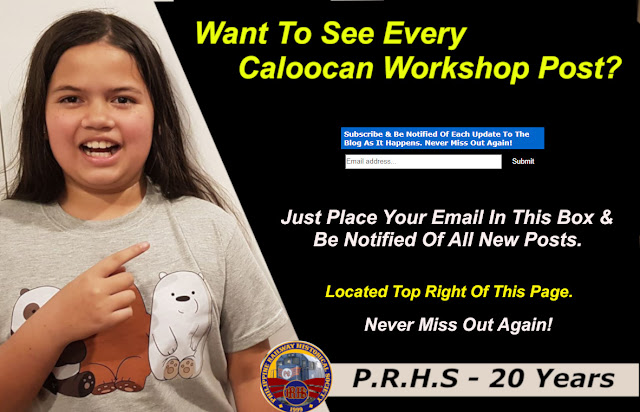 This is the blogsite of the Philippine Railway Historical Society.

We always welcome news, photos and small articles for inclusion on both this site and our parent group (see below). Please email us!
PRHS.Society at gmail.com

The Philippine Railway Historical Society and forums on Facebook and Yahoo groups have further information regarding these interesting railways and also a number of chat forums for those interested in all areas of Philippine transportation.

Our various forums have the latest news and information from a number of very knowledgeable people. Please join in with our PRHS family, learn about the railways of the Philippines and make new friends.

We now act as a information society, having removed ourselves from the badder elements of the Manila railfan hobby, existing to meet and help others with similar interests.

Subscribe & Be Notified Of Each Update To The Blog As It Happens. Never Miss Out Again!

Please support us by visiting our advertisers.

Want more information on the PRHS or have another Philippine railway enquiry?

For all your Philippine railway information photos and chat, please visit our HOMEPAGE!
Our group and activities are free - we are here to promote interest in the Philippine railways, make friendships and help with information. We are not a fundraising group and do not ask for funds.
Do you support the past and future of the railways in the Philippines? Come chat with us at PRHS Facebook. We look forward to meeting you.

We also publish occasional guides and fleet lists for the railfans interested in the Philippines.
These are all linked to our main PRHS website. 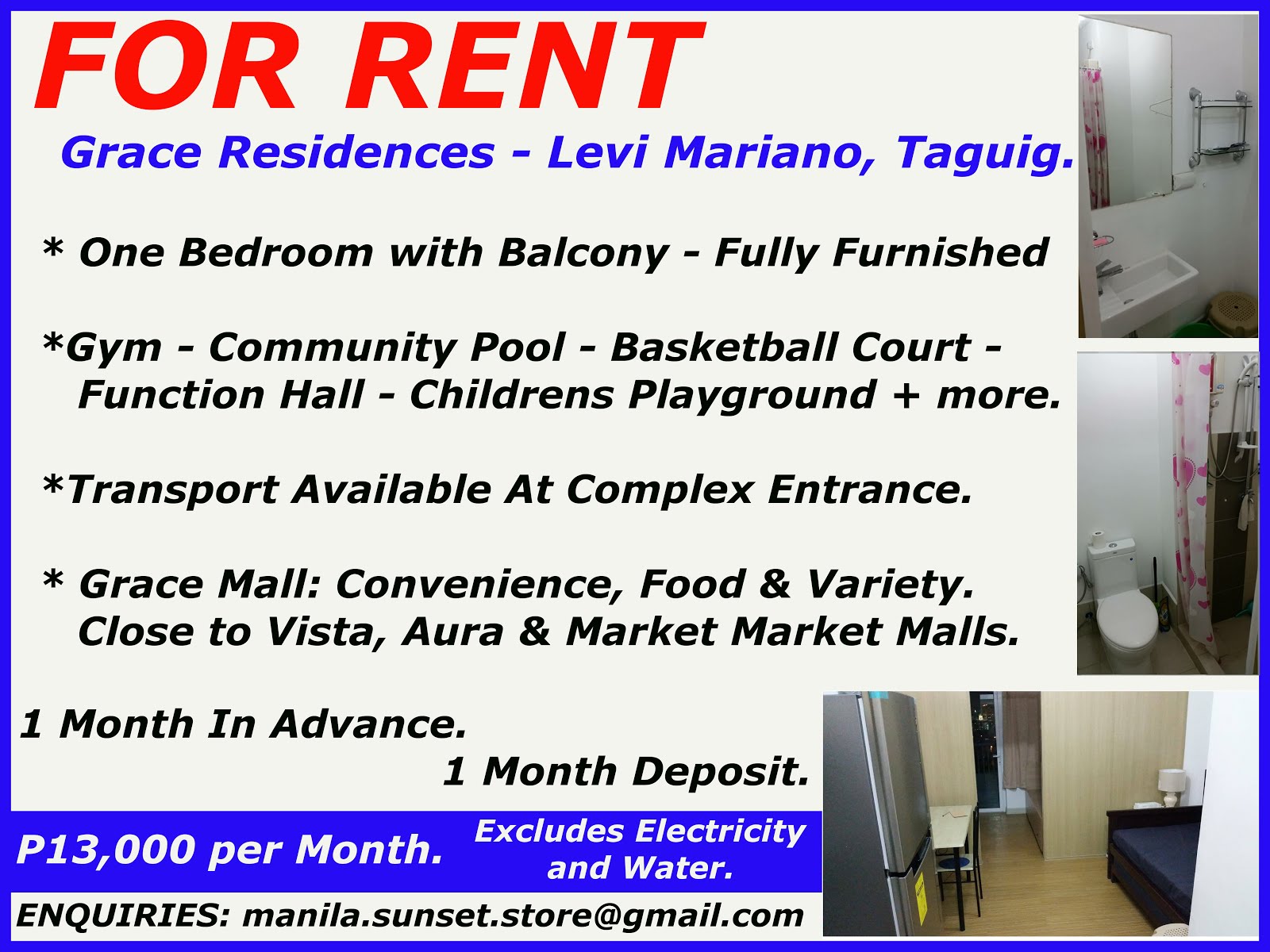